Worst 10-Day Start to a Year

Worst 10-Day Start to a Year

January 19, 2016 – Global stocks plummeted last Friday, capping a third weekly retreat as oil prices sank to a 12-year low and below $30/barrel, prompting new concerns about slowing world growth. Investors grew anxious over the likelihood that Western economic sanctions against Iran would be soon lifted (which they were over the weekend), allowing the Islamic Republic to boost exports by an estimated 500,000 barrels per day, worsening a global oversupply. The S&P 500 experienced its worst day in over four months on Friday. The MSCI All Country World Index (ACWI) is down 17.7% from its May 2015 high, closing Friday at its lowest level since August 2013. European stocks, as measured by the Stoxx Europe 600 Index, are down 20% from their May peak last year, entering a bear market. 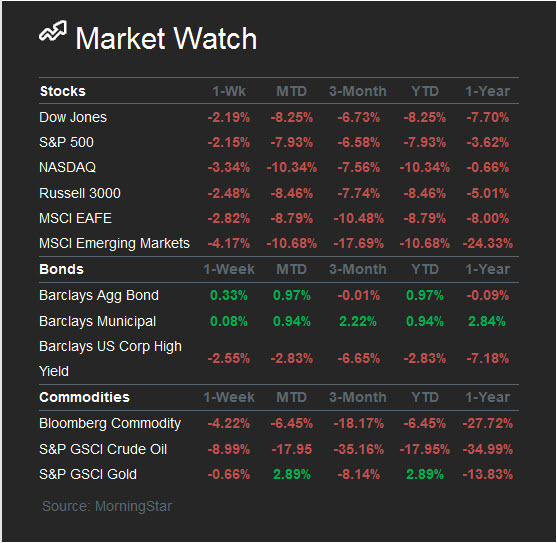 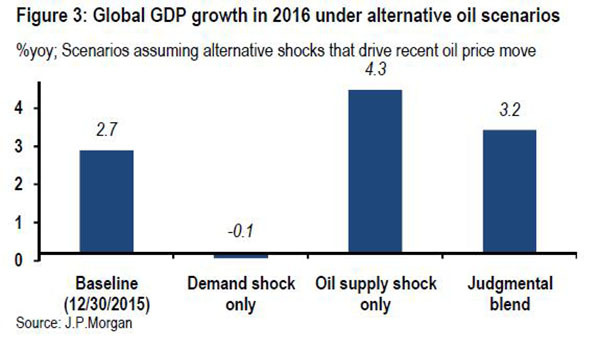 Chart of the Week: JPMorgan Looks for Confirmation of Consumer Spending Pickup; Believes Temporary Factors are Weighing on Growth

GlobalGDP Small
JPMorgan (JPM) notes that the rout in global markets continued this past week, stemming from a set of related concerns, including the collapse in commodity prices and the possibility of a related credit market event, China’s policy intentions and growth outlook, and the sluggishness of global economic activity. Indeed, the global economy ended the year on a surprisingly weak note, with 2.7% GDP growth posting the weakest quarterly gain of the entire expansion.

These developments pose a significant challenge to JPM’s global growth outlook, which calls for trend-like expansion this year, modestly stronger than in 2015 (see Judgmental Blend outlook above of +3.2%). For JPM to hold their current forecast much longer, several key shifts need to take place. First, a significant acceleration in developing markets’ (DM) consumer spending is needed in the coming months. JPM continues to believe that the collapse in oil prices predominantly reflects a positive “technological” supply shock, in which a wave of new production has overwhelmed demand. As such, the net effect of falling oil prices should be to boost global growth (Oil Supply shock only of +4.3%).

At the same time, there are reasons to temper this view. DM consumer spending has been lackluster in recent months, with last week’s U.S. retail sales report suggesting this pattern continued in December. The sluggishness has fed perceptions that households have saved a large portion of the energy-price windfall. Additionally, fears about a possible credit event, related to the drop in commodity prices or the rise in the dollar, and negative feedback to the broad economy are contributing to uncertainty and undermining the prices of risk assets more broadly. These various forces dampen demand, such that without any positive consumer effects from lower energy costs, the effects could possibly turn 2016 global growth slightly negative.